People and places that I’ve encountered along my musical path:

■ Performing
Todd Rundgren, Joan Jett, Keith, Jim Croce and Robert Hazard are just some of the famous musicians that grew up as I did in Philadelphia’s inner suburbs of Upper Darby and Lansdowne. Like them, I pursued a music career as a singer-songwriter, which led me to open for many of the touring acts of the era, including Livingston Taylor, Melanie, Tom Paxton, Michael Cooney, Dreams (Brecker Brothers), Hall & Oates and George Thorogood and The Destroyers.

■ D. W. Fearn/Veritable Recording Company
Doug Fearn is the founder of the world-famous D.W. Fearn Company, manufacturer of some of the finest vacuum tube microphone preamplifiers and other outboard equipment for the professional sound recording industry. Doug was the owner of Veritable Recording Company in Lansdowne, PA, where I worked as a studio musician in the 1970s. It was there that I cut many of my first original pop rock recordings with Doug as the producer. Doug has been a good friend and longtime supporter of my music.
​
■ Sound Gems Records
Sound Gems Records, was the label on which my one and only 45 rpm single was released in 1975. I was Sound Gems' first white pop artist at the time. It was produced by Doug Fearn and arranged by Joe and Lou Parente. I performed it on the then popular TV show Steele Pier, hosted by Ed Hurst.  Although the song Class of 65, written by Pal Rakes and Frank Fioravanti, briefly received local airplay, it never charted nationally. Fioravanti (owner of Sound Gems Records) was the executive producer of William DeVaughn’s 1974 smash hit, “Be Thankful for What You’ve Got”. Fioravanti  was also responsible for securing it's release on the original Roxbury Records label owned by Wes Farrell.  I was privileged to play bass for some of of the demos that would later be used for De Vaughn's follow-up album "Give the Little Man a Great Big Hand.” 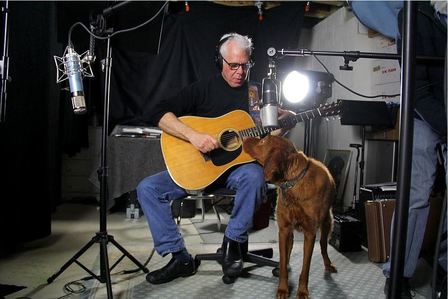 Me and Doug's dog, Kodaly, who loves the recording studio. We're discussing the pros and cons of the part I'm laying down.
■ Past Names
Mark Minassian, Mark, Mark Ian, The Mark Ian Band and Mark Eon were the names I used when I performed and recorded in the 1970s. In the 1980s it was the trio, The Bomp Zone, where I was the lead singer and played lead guitar and keys. Much of the music from those decades has been salvaged from old cassette tapes that have been digitally processed and are now featured on this site. Master tapes no longer exist.
​
■ Venues
JC Dobbs, Grendel’s Lair, The Ripley Music Hall, Bigelow’s, Hockster’s, Strode's Mill Theatre and Joe’s Sportsman’s Lounge were among the many Philly-area venues I played throughout the years, along with appearances at many local colleges, including University of Pennsylvania, Temple University, Villanova University, Widener University, Drexel University, and Beaver College (now Arcadia University).

■ ​The Pennsylvania Institute of Technology
PIT is where I returned to school after quitting the music business in 1985, in order to pursue a career in electronics and computer technology. After graduating, I landed a job with a small technology company called Varitronics Inc. I worked there for 17 years, becoming Technical Applications Manager, before retiring at age 54 and eventually moving to a small cottage in Chester County, PA. My education and work experience prepared me for the technical side of recording music in today's digital world.

■ Current Studios
I reconnected with Doug in 2014. His new studio, D. W. Fearn Studio was where I made my return to recording after a nearly 30-year hiatus from the music business. Doug and I began recording new material I had written, most of which you’ll find on this site. Shortly thereafter, I created Rosemill Studio, a home-based recording studio and contacted Leo Valentino to assist in the productions. He was the soundman for my trio The Bomp Zone in the 1980s, a former radio DJ and was looking for a new creative project. Recording sessions continue today mainly at Rosemill Studio, with occasional production at D.W. Fearn Studio.

■ Current Names
I Am Winkle, Last Stand Blues Band and Into the Soup are the names with which I am currently associated. Performing with my friends Tony D’Addono and John Michowychock, I record blues songs as part of the Last Stand Blues Band. When I venture (pun intended) into the instrumental surf music realm, it’s as my alter-ego surf band, Into the Soup. And for all other recordings and genres, such as singer-songwriter, rock, retro-pop, folk, etc., I perform as I Am Winkle, which references my awakening after so many years away from the music business, a nod to the famous character in Washington Irving’s story, Rip Van Winkle.
Please Comment.