I Am Winkle: Rosemill Studio Recordings 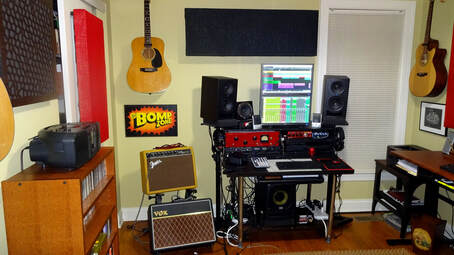 My updated modest home studio.
As my interest in writing and recording began to grow again, I decided to piece together a modest home studio of my own. At first just a small corner of the living room, it finally migrated into a small (10' 4" by 11') second bedroom in my single floor home that I call Rosemill Studio. As things expanded with microphones, interfaces, software, monitor speakers, and of course more instruments, I decided I needed an accomplice to help out with the recording process.

So I picked up the phone and called my dear old friend Leo (ears) Valentino, who had been the soundman for the last band I was in called The Bomp Zone back in the 1980's. Leo had been a radio disc jockey for a number of years and has an extensive knowledge of pop music. He always had a great sense of what I was trying to do musically, and was also deeply involved with the home EP we did with the band back in the 80s called "Entry No Exit". We had kept in touch from time-to-time over the years, but it had been quite awhile since my last contact with him.

I told him what I was up to, and asked if he had any interest in helping me record some new material. He said that he was searching for a new creative outlet and looked forward to collaborating with me again. Except for a brief pause during the COVID-19 pandemic, we've since covered an array of musical genres with more material on the way.
As production ramped back up in 2021, I had at the top of my list of new projects a return to my “wheelhouse” of pop-rock music, with In the Milky Way, featuring a jangly 12-string Danelectro. We started recording in early July and wrapped up the song by the end of August.

Carolyn Asti created some wonderful artwork to match the lyrics for the accompanying video to the song, and she and Katie Kilmartin teamed up to provide some great background vocals. A special thanks to both for their important contributions.

With You Without You

This is a song I actually wrote in my head before I ever picked up the guitar and started playing again after my lengthy hiatus. It was sort of a challenging mental exercise that I took on at one point prior to my "I Am Winkle" years. I wrote the lyrics and the melody and some harmony parts, but never even picked up an instrument to accompany my idea. After I was done I simply put it away and thought of it as just a bit of fun, never giving it much thought until I started playing again. It was at that point that I worked out the rest of the arrangement. It's the kind of pop song I would have loved when I was a teenager. Lots of guitars and vocal harmonies, with a driving, danceable beat.
​Falling Apart is a song about someone having a conversation with their subconscious self. I've used this type of "inner psychological conversation" in other songs I've written and seem compelled to return to it from time-to-time. People who have listened to it have heard hints of everything from Mamas and Papas harmony to David Bowie's intimate vocals. So many great artists from the past are creeping around my creative psyche, but I'm rarely aware of any specific connections during the songwriting process. In fact, I make an effort to avoid them. Still, it's always nice to hear that people hear influences of artists I highly respect.
​A song that explores the psychological response people have to social upheaval. If left unchecked the chaos eventually permeates people's dreams. So are we dreaming of what we will become or what we have become?  Is it haunting you now?
This song was based on an electric guitar theme I wrote over 25 years ago. Back then, I would play that part over and over, but could never come up with any other parts to finish a song. After all that time I returned to that theme and finally wrote this song, "Tell Me What To Say," using it as the basis for the chorus. Moral of the story...never throw away anything you create. It may end up as part of a song sometime in the future. You just never know when the spark of creativity will pull everything together.
An artistic departure for me musically. Think dark city streets, shadows, lies and loners. Recorded at Rosemill Studios, my home studio. Produced by Leo Valentino and myself, Mark Minassian, aka I Am Winkle.
Dedicated to Arthur "Pete" Minassian (June 26, 1936 to April 16, 2013)
The second song we recorded was a song I had written and dedicated to my oldest brother, Arthur "Pete" Minassian, who died on April 16, 2013 of bile duct and liver cancer. This was not the first person in my family to die from cancer. Both of my parents, my aunt Rose, my sister in law Marie, and my cousins Sally and Frank also died from this devastating disease. But it was Pete's death that seemed to throw an internal switch inside me and set me back on my path as a songwriter.

It's also in memory of all those who have fought the battle against cancer and lost. If you would like the name of a friend or loved one added to the list below, please send their full name and the type of cancer they courageously battled to winkle@iamwinkle.com or through my Contact page. I would be honored to add it. And please share this song with anyone who you think might receive even a small amount of comfort from listening to it.

A special thanks to Tracy Slider and Paige Walton for enhancing this song with their vocal talents.
In memory of all those who have fought the battle against cancer and lost including: