You're a Long Gone Woman​ ​by the Last Stand Blues Band

Here's what Recording Magazine had to say: ​
“This is a fantastic group effort that harkens back to the legendary sounds of the late 60’s group The Electric Flag. The band has achieved a roomy, open sound on the recording thanks to judicious panning and frequency control…. The star of the show is Tony’s fantastic electric lead guitar. Killer tone, and what a performance! In our decades at the helm of this column, we’ve rarely heard a better pure blues combination.” ~  by Marty Peters. 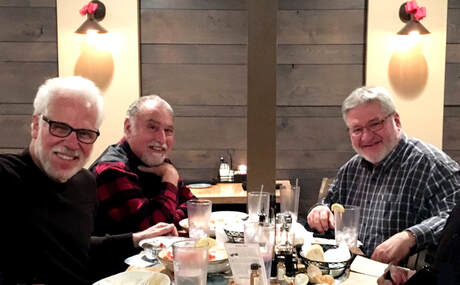 Last Stand Blues Band takes time out to refuel after "Long Gone" session. From left to right: Mark Minassian, Tony D'Addono, and John Mikowychok.
​I had wanted to write a blues song for some time, so as 2019 was drawing to a close I got to  work and spun out a bluesy tune with a touch of gospel influence woven throughout. I decided to call upon two of my most respected musician friends to help out on the instrument tracks as opposed to the "do it all myself" approach I usually practice.

Enter “Pepper” John Mikowychok, who not only supplied the fabulous sounding B3 organ parts for the tune, but generously agreed to provide horn charts and perform them on his Triton keyboard. Being an accomplished vocalist in his own right, he also sang background parts along with me and the talented Carolyn Asti, creating the gospel-like choir that came to be a major element in the second half of the song.

Next I called upon the best guitarist I have the pleasure of knowing, Tony “the Chief” D'Addono, to put his blues chops to work on the tune and not surprisingly his silky lead guitar lines take the song up another notch.
​​
I supplied the bass and rhythm guitar parts and me and my recording/mixing partner, Leo Valentino, painstakingly created the drum tracks with as much tempo mapping realism as we could. And to polish it all off, I added the lead vocal part with as much understated feeling as I could muster.
In my usual band fantasy approach, I decided to call us the Last Stand Blues Band. All in all “the band” was very happy with the way You're a Long Gone Woman turned out and we hope you enjoy listening to it as much as we enjoyed creating it.