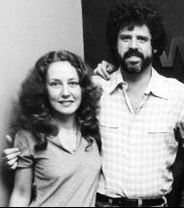 WIOQ DJs, Helen Leicht and David Dye
I formed The Mark Ian Band in 1976 and recorded three songs that year: Love Again At All, Fallen Angels, and Now That You Know It. The songs were recorded at Veritable Studios in Lansdowne, PA, and were produced by D.W. Fearn. The songs were subsequently played on Philadelphia's popular radio station, WIOQ, on a special radio program they aired on Sunday Nights called “Debut on Q.” The show was meant to provide an opportunity for local artists to have their music heard on the radio. It was hosted by Helen Leicht, who went on to become a well-known DJ in Philadelphia and whose career has lasted over 40 years.

The Mark Ian Band performed only one live concert, in October of 1976, at Strode's Mill Theatre, in Chester County, PA. The theatre was later renamed and was the first incarnation of the People's Light and Theater Company. Although the concert was a great success, the band soon disbanded after their performance.